You Are Here Home Science Antarctica Shock: Here’s What Melted 20% Of An Island’s Snow In 9 Days

Global warming seems to be one of the worst enemies of humanity, besides the new coronavirus, aka COVID 19, who is triggering a lot of panic all over the world these days.

This is definitely causing a lot of damage to our planet, and the fact that glaciers are melting at a faster rate than ever before could also have catastrophic results.

For instance, not too long ago, we were reporting about the “doomsday glacier,” a potential bringer of tragedy for our planet.

Then, it’s been also revealed that we’re also looking at another lethal threat: Daily Mail recently revealed that unknown ancient viruses with the potential to harm us, which are up to 15,000 years old, had been discovered luring in the prehistoric ice atop the Tibetan plateau.

Now, it seems that that something led to the melting of 20% of an island’s snow in only nine days – this was a heat wave. This is definitely a common symptom of the climate crisis.

MSM revealed some images that show Eagle Island on the northeastern peninsula of the icy continent at the start of this month’s Antarctic heat wave.

It seems that by the end of the ninth day heat event, much of the island beneath the ice cap has been exposed and pools of meltwater opened up on the surface of the island as well.

It’s also worth noting that Antarctica experienced the hottest day on record earlier this month.

In 9 days, 4 inches of Eagle Island’s snowpack melted – this is about 20% of the island’s total seasonal snow accumulation, according to NASA’s Earth Observatory.

He continued and said: “You see these kinds of melt events in Alaska and Greenland, but not usually in Antarctica.” 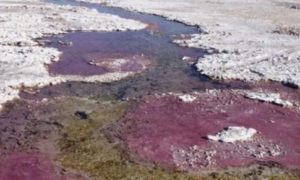