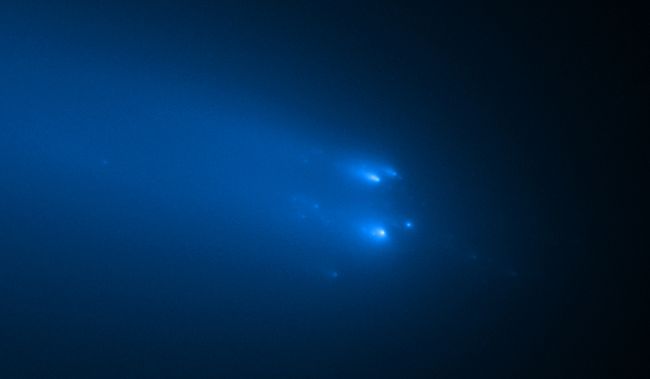 The opportunity is achievable by the trajectory of Solar Orbiter probe, a collaborative mission between NASA and ESA. Although the spacecraft was created to analyze the Sun, one of the tools on board of it could also collect crucial data on Comet ATLAS’ tail in an unprecedented observational occasion.

“If Solar Orbiter instruments detect material from Comet ATLAS, it will be the first predicted serendipitous comet tail crossing by an active spacecraft carrying appropriate instrumentation for the detection of cometary material,” a team of scientists wrote in a new paper that details the opportunity.

Comet ATLAS Parts to Be Studied

Astronomers noticed an icy chunk officially named C/2019 Y4​, but which is now known as Comet ATLAS, back on December 28th of last year, using the Asteroid Terrestrial-impact Last Alert System, or ATLAS observatory in Hawai’i.

Throughout the following months, the dim comet brightened at a rapid pace, rising expectations that it might put on a show when it was closest to the Sun, in late May.​ However, last month, Comet ATLAS started crumbling. By the end of April, the space rock was in over half a dozen parts, as per images taken by the Hubble Space Telescope.

In the meantime, Solar Orbiter launched on February 9th on a mission to calculate highly charged particles known as plasma in the Sun’s outer atmosphere and to capture photographs of the Sun’s poles, among other assignments. At the moment, researchers are warming up the probe’s tools while the Solar Orbiter flies towards Venus to push the spacecraft closer to the Sun.

Geraint Jones at University College London and his colleagues has compared the trajectories of the two objects just to find out that the Solar Orbiter will pass behind the comet in late May or early June at a distance of about 30 million kilometers (18 million miles).

They thought to check because Jones is also leading a new ESA mission dubbed Comet Interceptor, which would take off in 2028. The probe would wander around in constant orbit far from Earth, waiting for new comets to travel toward the inner Solar System for the first time. When researchers notice a promising target, a miniature probe will separate from the main vehicle and head over to analyze the comet from close distance.

According to the team’s calculations, Solar Orbiter could cross the outer ion tail of Comet ATLAS, where charged particles discharging from the Sun ionize cometary gas. If the comet is losing lots of materials at the time, two instruments on board of the probe may be capable to discover ions or magnetic field disturbances from the comet.

Then on June 6h, Solar Orbiter should travel through the dust region left by Comet ATLAS​ approximately 2.5 weeks earlier. Depending on the amount of dust the space rock lost, the spacecraft’s instruments may be able to detect that dust surrounding the vehicle or at least find some magnetic field stunts known as Interplanetary Field Enhancements.

The study is detailed in a paper published on May 5th in the journal Research Notes of the American Astronomical Society.