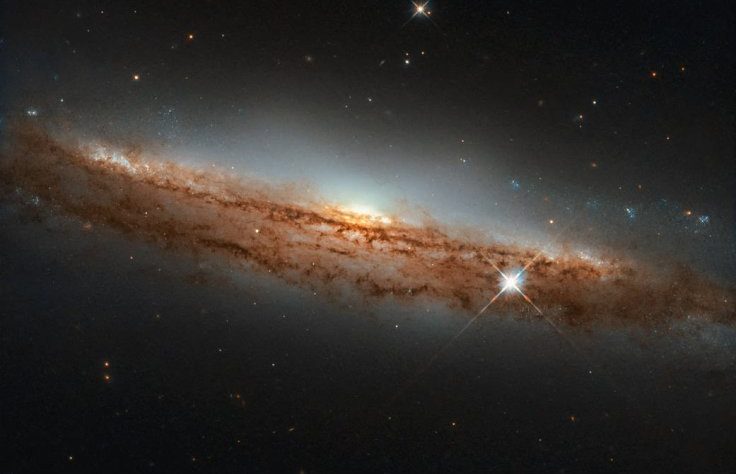 NASA and ESA’s (European Space Agency) Hubble Space Telescope has captured a fascinating image of a spiral galaxy. The galaxy, known as NGC 3717, is hosted by Hydra constellation, whose location is approximated to be at 60 million light-years away.

Similar to the Milky Way, NGC 3717​ is a spiral galaxy, which means it also has thin arms that seem to spin from its core. Normally, spiral galaxies are captured from the front to clearly depict their distinct form. However, Hubble’s last image shows NGC 3717​ from its side, but the center of the galaxy is also visible.

“Seeing a spiral almost in profile, as Hubble has here, can provide a vivid sense of its three-dimensional shape,” the ESA stated in a press release. “Through most of their expanse, spiral galaxies are shaped like a thin pancake.”

However, at their cores, they host bright, globular, star-filled bumps that expand above and below this disk. These bulges give the galaxies the form of a flying saucer when they are captured from the profile, ESA added.

According to the space agency, the bump in the galaxy’s core is only visible in the photography because the angle of the image was a bit tilted when it was captured by the telescope.

The NGC 3717​ is the latest cosmic body captured by Hubble this month. Only last week, the powerful telescope managed to photograph an impressive image of a pair of merging galaxies, known as Medusa Merger.

As per ESA, the Medusa Merger took shape after two galaxies crashed with each other. Throughout the collision, the larger of the two galaxies devoured the smaller one, which had plenty of gas.

Besides the pair of galaxies merging, Hubble Space Telescope also captured a galaxy that is traveling rapidly towards our Milky Way. Known as Messier 86, the ESA stated that the galaxy is at the moment moving at an overall speed on approximately 874,000 kilometers per hour.