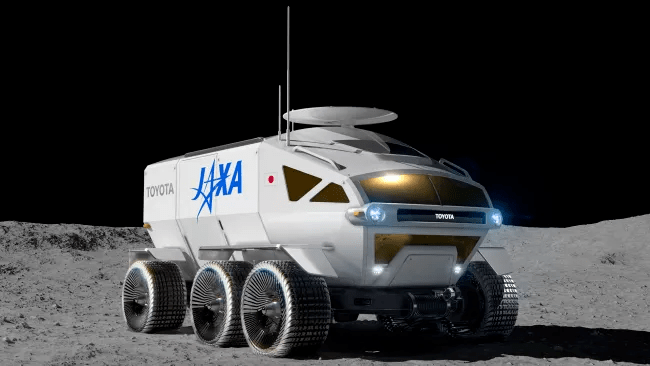 The lunar rover being built by the Japan Aerospace Exploration Agency (JAXA), in collaboration with Toyota, has finally been given a name. The pressurized Moon vehicle, which is set to launch in the late 2020s, has been dubbed ‘Lunar Cruiser,’ according to an announcement made by a representative of both companies.

The nickname, a nod to Toyota’s Land Cruiser SUV, ‘was chosen because of the familiar feeling it offers the people involved in the development and manufacture of the vehicle prototype as part of the joint research project as well as the familiarity it will provide the general public,” the update reads.

JAXA and Toyota signed a deal last summer to build the lunar lander, which will include fuel-cell electric-vehicle technologies. This year, the collaboration is working to develop test parts for each key piece of the vehicle and for a prototype of the Lunar Cruiser itself.

“The work involves the use of simulations to confirm power and heat dissipation performance while driving, the manufacture and assessment of prototype tires, and the use of virtual reality and full-scale models to consider the layout of equipment in the cabin of the Lunar Cruiser,” the update says.

JAXA, Toyota, and Mitsubishi Heavy Industries lead the Team Japan Working Group, which was set up in August of 2019 to research ways to help create a sustainable human presence on the Moon. Making this goal a reality will almost definitely ask for International cooperation, with NASA, for instance, which is working toward the same aim with its Artemis program.

The Lunar Cruiser could have a major role in the expansion of human society to the Moon; for instance, the vehicle could aid astronauts to explore the lunar polar areas for water ice, Toyota representatives said last year when it revealed the rover project.