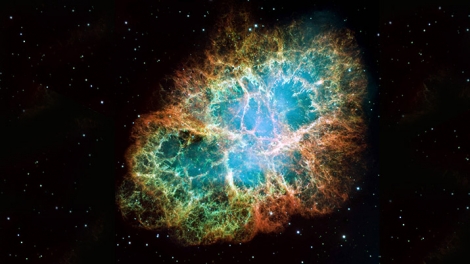 NASA made enthusiasts’ day this Sunday when the space agency released an amazing 3D image of the Crab Nebula.

It’s been revealed by Fox News that astronomers and visualization experts from NASA managed to combine the visible infrared and X-ray vision of the space agency’s Great Observatories in order to create a three-dimensional representation of the Crab Nebula – the remains of an exploded star.

Fox News revealed that the multiwavelength computer graphics visualization is based on images that have been gotten from the Chandra X-ray Observatory and the Hubble and Spitzer space telescopes as well.

STScI’s visualization scientist Frank Summers said that “Seeing two-dimensional images of an object, especially of a complex structure like the Crab Nebula, doesn’t give you a good idea of its three-dimensional nature.”

The man who led the team that developed the movie continued and explained that “With this scientific interpretation, we want to help people understand the Crab Nebula’s nested and interconnected geometry. The interplay of the multiwavelength observations illuminates all of these structures.”

Revealing the structure that makes up the nebula

He also made sure to highlight the fact that without mixing X-ray, infrared, and visible light, they could have never been able to get the full picture.

The video that you can see for yourselves here has about four minutes, and it reveals the structure that makes up the nebula. Viewers can get a better understanding of the complex and mysterious processing that are powering the nebula.

And just in case you don’t know, here’s a little bit of history: the Crab Nebula has been first identified back in 1731 by the English astronomer John Bevis.

NASA explained that the powerhouse engine that is energizing the whole system is a pulsar – a highly rapid spinning neutron star, the dense crushed core of the exploded star.

New Arctic Sea Ice Record: What Should We Expect

Strange Activity Spotted on a Centaur: What Should You Know

Antarctic Fossil Might Belong To The Largest Flying Bird Ever, Study Says