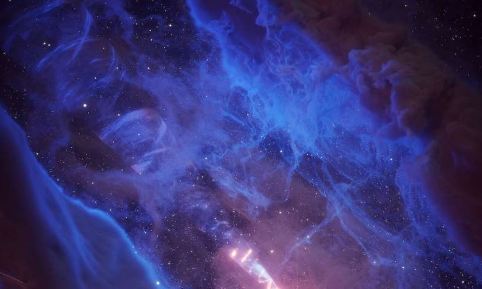 Scientists have discovered a strange gamma-ray heartbeat coming from a cosmic gas cloud. The hidden cloud in the constellation Aquila is pulsing with the rhythm of a nearby precessing black hole, showing a connection between the two objects.

A team of scientists from Spain, Germany, the US, and China, rigorously examined more than 10 years of data from NASA’s Fermi gamma-ray space telescope, gazing at a so-called microquasar. They further cataloged it as a system and called it SS 433, which is approximately 15.000 lightyears away in the Milky Way. SS 433 consists of a massive star with 30 times the mass of our Sun and a black hole of around 10 to 20 solar masses.

The scientists’ study has been recently published, and their findings are genuinely astonishing. Here is what you need to know.

The SS 433 system has two objects that orbit each other with a period of 13 days. One is a giant star, and the other a black hole. The black hole sucks matter from the giant star. Scientists explained how that material stores in an accretion disc before sinking into the black hole, something like water in the whirl above the drain of a bathtub.

A part of that matter, however, doesn’t fall down the drain. It shoots out instead, at high speed in two straight jets in opposite directions below and above the rotating accretion disk.

Such a setting is known from active galaxies dubbed quasars with giant black holes with millions of solar masses at their cores that discharge jets of thousands of lightyears into the Universe. SS 433 is a scaled-down version of these intriguing quasars, and it has been called a microquasar.

Furthermore, the high-speed particles and the powerful magnetic fields in those jets generate X-rays and gamma-rays. ICREA Professor Diego F. Torres explained: “The accretion disc does not lie exactly in the plane of the orbit of the two objects; it precesses, or sways like a spanning top that has been set up slanted on a table.” So, we understand that the two jets spiral into the neighboring space, rather than just creating a straight line.

The precession of the black hole’s jets is around 162 days. Rigorous research unveiled a gamma-way signal with the same period from a position that is somehow far from the SS 433’s jets. Scientists labeled it Fermi J1913+0515 and found it at the position of an average gas increase. The regular periods show the microquasar fuels the gas cloud’s emission.