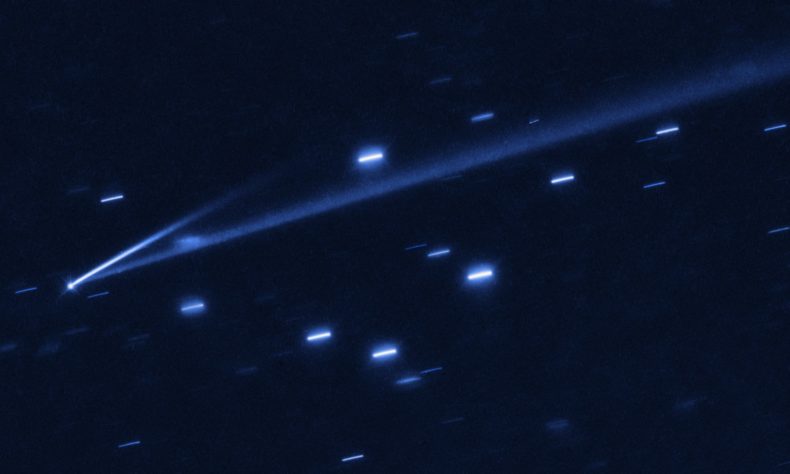 Back in May, astronomers in Hawai’i revealed a peculiar finding in the skies – a new kind of asteroid that has a tail, similar to a comet.

However, now, the scientists have announced that their initial classification was incorrect and that the weird cosmic body is, in fact, a comet, even though the ‘disguise’ doesn’t make it any less odd. So what triggered the peculiar mix?

We are prone to think of asteroids and comets are rather rigorously described categories. Comets have long orbits and are filled with volatile ice materials that evaporate, leaving behind a dusty halo and tail when it gets too close to the Sun.

On the other hand, asteroids are usually believed to be rocky, dry, and inactive, with orbits in the Solar System, resembling those of the planets. At times, however, astronomers discover something that conflicts these definitions. The recently-discovered ‘asteroid,’ dubbed 2019 LD2, was one of those instances.

The space object had an orbit similar to those of asteroids, but a comet-like tail. That is unusual, but not entirely unknown, as researchers call this type of asteroids that show comet-like characteristics active asteroids.

Still, it was not the what, but rather the where that made the peculiar 2019 LD2 strange.

The cosmic body seemed to have the same orbit as Jupiter, in an asteroid bunch known as the Jupiter Trojans. It was initially believed to be the first such asteroid that emitted gas as a comet would.

However, after a thorough analysis, started by amateur astronomers, the experts realized this is not a brand new type of asteroid; in fact, it was a normal comet that has an irregular and changing orbit, which happens to look like that of a trojan asteroid. Or an ‘interloper comet masquerading as a member of the Trojan population,’ as a press release from the University of Hawai’i, where the finding and the analysis were made, put it.

The comet has since been dubbed P/2019 LD2, and the relabeling was announced in a Minor Planet Electronic Circular on May 22nd. In spite of the disappointment that this comic body is not actually a new type of asteroid, it is still a stunning discovery.