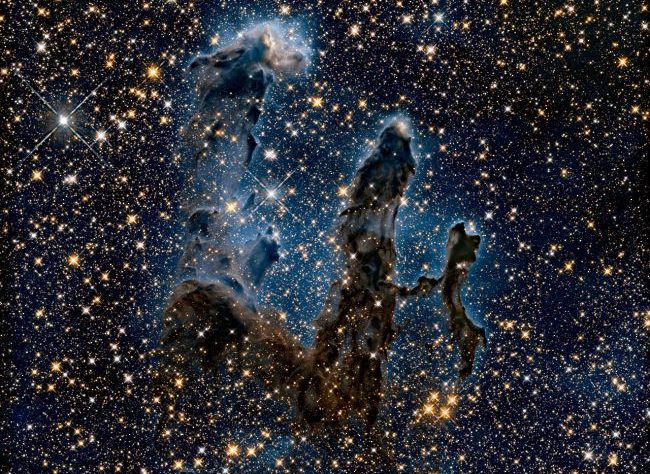 The ‘Pillars of Creation’ is a gigantic area of star-birthing material located in the Eagle Nebula, approximately 6,000 light-years away from Earth. These vines of gas and dust, made to look colorful due to the radiation of bright young stars glowing inside, became a Milky Way monument because of a unique visible-light image captured by the Hubble Space Telescope back in 1995.

Now, NASA researchers have published a new image of the Pillars, this time concentrating on the infrared radiation that is invisible to the human eye. In the new capture, also snapped by the Hubble Space Telescope, the vivid pillars appear dimmer as newborn stars shine brightly.

The Pillars, which extend about five light-years in length, are natural hatchers of star formation due to their thick sacks of hydrogen gas, as per NASA. While more massive amounts of gas and dust accumulate into a single, gravitationally-dense region, that area heats up and has the ability to turn into protostars or the seeds of a star.

If a protostar keeps expanding and increasing in temperature enough to produce a nuclear reaction at its nuclei, a complete star appears. As the image depicts, the most active star-birthing area within the Pillars is located at the top of the largest pillar, which gleams with what seems to be transparent blue radiation.

One of a Kind Image

As per NASA astronomer Paul Scowen, who led the first Hubble exploration of the Eagle Nebula back in 1995, as the stars in the top region of the Pillars expand, their radiation will also become more powerful, slowly annihilating the gas surrounding them.

“The gaseous pillars are actually getting ionized, a process by which electrons are stripped off of atoms, and heated up by radiation from the massive stars,” Scowen said in a 2015 statement from NASA. “The stars’ strong winds and the barrage of charged particles … are literally sandblasting away the tops of these pillars.”

And maybe that is why images like this one are incredibly special: because we will never get to see the Pillars of Creation in the same format ever again.