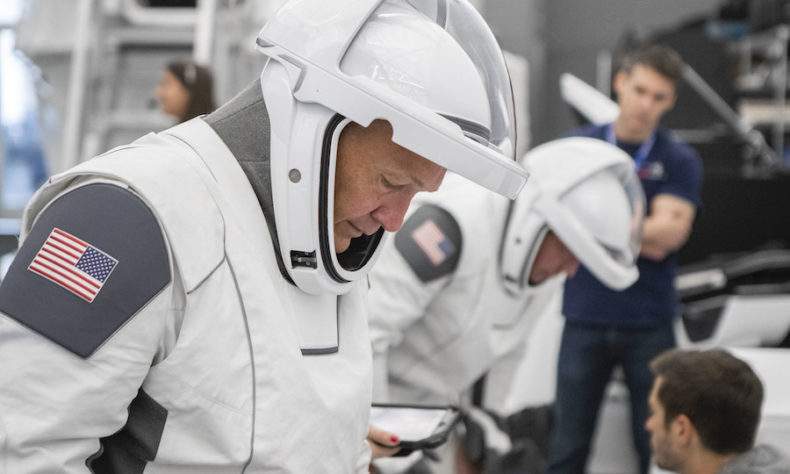 SpaceX has launched a Falcon 9 rocket and Crew Dragon capsule this week on Thursday, making way for the future planned rehearsal with NASA astronauts Doug Hurley and Bob Behnken.

Both NASA and SpaceX officials held a launch readiness review and approved the final preparations of SpaceX​ for the Crew Dragon In-Flight Abort Test on Saturday. The test flight was scheduled for liftoff from pad 39A at 8 a.m EST (13.00 GMT).

The launch escape test will check whether the SuperDraco abort engines on the capsule can safely propel the spacecraft from the Falcon 9 rocket while still flying. If the demonstration goes well, the abort test will be the last planned test flight for SpaceX’s Crew Dragon project, before the two astronauts are approved to fly the next Crew Dragon expedition to the International Space Station (ISS).

“SpaceX and NASA flight controllers along with support teams will be staged as they will for future Crew Dragon missions, helping the integrated launch team gain additional experience beyond existing simulations and training events,” NASA said in a statement.

The crew access arm is set to always retreat from the capsule in the last hour of the countdown, and the spacecraft’s abort engines are then set to flight.

SpaceX​ and Boeing, NASA’s other commercial crew partner, are in charge of recovering their spacecraft after a usual landing. The Crew Dragon is set to land at sea, with the main zone in the Atlantic Ocean east of Florida and a reserve area in the Gulf of Mexico, and Boeing’s Starliner capsule is set for a landing on the soil, probably at one of the few sites in the Western United States.

“We requested from (the military), if something goes awry, such as a pad abort or an ascent abort — which is what we’re talking about with this In-Flight Abort Test — then they typically would go out and deploy their teams and provide for rescuing the crew, picking them up,” said Ted Mosteller, NASA’s commercial crew launch and landing lead, in an interview.

No Time to Spare

For a manned expedition, the search and rescue team at Patrick Air Force Base will have the main duty of getting the astronauts from the Crew Dragon capsule after a launch emergency in the first couple of minutes of the takeoff.

If needed, thrusters on both the Crew Dragon and Starliner capsules would fire after an abort to make sure the spacecraft touches down within approximately 300 miles of eastern Canada or Ireland, According to NASA representatives.

“Once you detach from a failing rocket, you will either have enough propellant to slow down and land before you get there, or to boost you to the other side of that zone,” said Steve Payne, NASA’s launch integration manager for the commercial crew program.

NASA and contractor teams will analyze sea states in the Atlantic Ocean as well, before showing green lights for the crew launch.
​